M is for Myeloma is a place to chronicle my family's newest 'adventure' living with multiple myeloma to keep family and friends updated and also hopefully help others living with the disease.

Wow, has it really been a whole month?!

It doesn't seem possible, but I will own up to procrastinating...and I won't be offended if you want to call me a slacker!

I was indeed released from MIRTs daily scrutiny back on August 15th. Alex and I packed up to head out for the loooong drive home the next morning since we wouldn't be needing the car in Little Rock anymore. We stopped in Louisville to spend the night at my SIL and BILs house. Louisville is about halfway so it made a good stopping point and gave us a chance to visit, meet our nephew Jayden (who was born back in March during my first round of treatment), and see their brand new house. My BIL was out of town for work, but it was nice to visit with Laura, Jenna, and Jayden. Here is a pic of me with my niece and nephew. 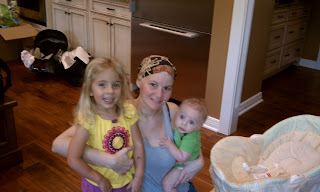 We made it home late on the 17th and it was great to be home and see the kids. There is nothing like sleeping in your own bed and showering in your own shower! I was feeling pretty good (better than after the transplants) but it still took a while to get my strength back. It proved to be a busy couple of weeks though, we actually had a lot of excitement in Maryland! On August 23rd we had the quite unexpected 'pleasure' of experiencing the 5.9 magnitude earthquake centered in Virginia. This was definitely wacky! We had experienced a teeny tiny earthquake the previous year and I felt that one...it felt like a truck rumbled past the house. Just one quick shake and I didn't even know it was an earthquake until later in the day. This recent one though, the whole room was shaking and it lasted for 20-30 seconds...kind of a wild ride! It was the big news for a couple of days...until it became clear that hurricane Irene was headed our way! She showed up that weekend late Saturday overnight into Sunday. Thankfully we didn't have any damage or trees down, and our power stayed on, but others in the area weren't so lucky. Alex's mom had three inches of water in her basement and some people were without power for a week! She even had the nerve to disrupt the first day of kindergarten for Olivia!!

That's right folks, my baby was starting kindergarten! It had a been a main goal of mine to be done with the intensive part of treatment in time to send her off to kindergarten, and I'm so thankful I was able to accomplish that. Through all the geological and weather related excitement we were also making sure we everything prepared for the big day! This meant making sure we had everything in the list of required supplies, making sure all the required paperwork was in place, and making sure we had some non-stained cute back to school clothes!

Thanks to Irene things got pushed back a few days, but once the day arrived things couldn't have gone better. I was very VERY proud of my girl. She handled it like a champ...no tears, no fuss, no problem at all! Here are a couple of pics of the first day. 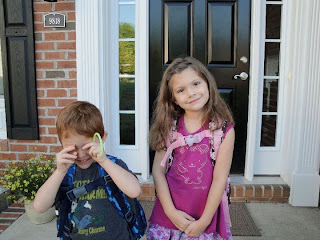 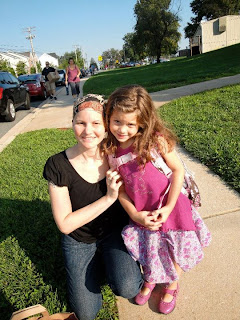 Labor day weekend we had two birthday parties on Friday and Saturday evenings, which gave us a little chance to catch up with some friends. Then we mostly took it easy on Sunday. Labor day itself was an exciting day though...my other baby turned three! He's very excited to be a big three year old! We had cake and ice cream for him that evening, but the real party is still in the works. It's crazy that my baby is three, but I have to say that being done with diapers is SPECTACULAR! Here are a couple of pics of my handsome devil....one with a blue ice cream tongue, and one obviously quite pleased with his new Star Wars toy. 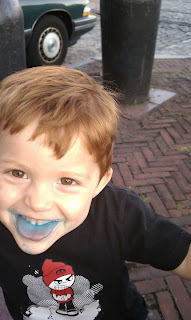 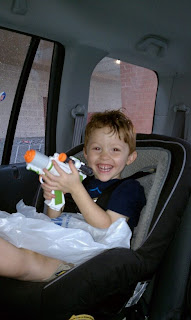 After all that add another whole week of drenching rain in Maryland (thanks to tropical storm Lee), and that brings up almost up to speed.

I'm actually back in Little Rock as I type, waiting to catch a flight home later today. I flew in on Sunday to get started with restaging for a Tuesday appointment with Dr. B. I've had the pleasure of staying with my friends M and J, J just finished up his consolidation and was discharged Tuesday. I am SO very grateful that they have opened their hearts and their home to me and my family. Meeting them has truly been a gift!

Restaging went fabulously, that is if you can ever really call 3+ hours in MRIs and PET scanners topped off with a large needle being jammed into to your bone fabulous! All good news at the appointment, still in complete remission! I had been scheduled for a vertebroplasty for a lesion on my T12 vertebra, but Dr. B wanted to wait to see if it would heal up on it's own with a few months of Zometa treatment. So I'm headed back with my orders to start maintenance therapy...Revlimid daily for 21 days, and dex and Velcade once a week. This will go on for 3 years. Yes you read that right, THREE YEARS! I'm hoping the side effects will be minimal, but only time will tell. The great news is that I've been approved to get my Velcade as a subcutaneous injection. Velcade is normally given I.V., which requires either getting an I.V. placed weekly, or getting a venous access port implanted. I had decided I would go with getting a port placed (it's kind of like a central line that is implanted entirely under the skin), to avoid the damage that can happen from frequent I.V. placement and caustic drug infusion. Then I started hearing that some centers had started giving Velcade as a subcutaneous injection after a large study showed it was just as effective and resulted in fewer side effects (namely peripheral neuropathy, which is annoying at least and extremely painful at worst). Indeed my home center was moving to all subcutaneous for Velcade so I brought this up at my appointment here in Arkansas and was approved to go that route! Hopefully this won't start a riot among other MIRT patients! So I happily canceled both the vertebroplasty (where they inject cement in the lesion to prevent vertebral fracture) and port placement. Now I'm relaxing for the day before heading to the airport to catch a flight home this evening. M and J had to go to Memphis for the morning so I'm here keeping their sweet boxer, Lucy, company. She's happily snoring on the couch.
Posted by Jody at 10:48 AM 5 comments:

Jody
I'm a 35 year old wife, mother of two, and research scientist. I was diagnosed with multiple myeloma (a bone marrow cancer of plasma cells) in December of 2010.

The posts are chronological so use the archive to go back to the first post if you want the history up to and through the start of treatment.

Other Must-Reads: check back for new additions!